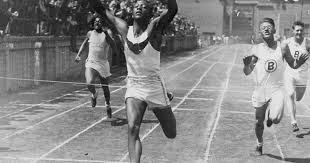 “The battles that count aren’t the ones for gold medals. The struggles within yourself – the invisible, inevitable battles inside all of us – that’s where it’s at.” ~ Jesse Owens

I haven’t faced too much adversity in my life. Not really. Not the kind of adversity that truly qualifies as so. Sure, I’ve had my moments — my days, weeks, months — where I’ve struggled to overcome some perceived hardship … some difficulty brought on by life’s inevitable routines … but even in those moments where I’ve been at my darkest, even when I’ve found myself seated at the bottom of a rabbit hole, I’ve always managed to crawl out. Partially because I have some inherent drive to always better myself, but also partially because I’ve never been in a situation so discouraging, so bleak, that it makes the bottom of a rabbit hole appealing. And because whenever I’ve thought “that’s it, I’m done, I can’t”, I always think of the one person that taught me otherwise.

When I was younger (think grade school through high school) the only thing — and I mean the only thing I wanted was to run in the Olympics. Every time I hit the track I imagined the podium, the playing of our national anthem, the waving flag in the distance … sometimes I would imagine this scenario so intently that I’d cry. Always thanking my coaches, blowing kisses to the crowded bleachers. Of course I came from a background that allowed my dreams to have possibility. Not just because I was fast (I held the national prep record and for a time, would have appeared to be on my way to that aforementioned podium), but because it was instilled in me that anything was possible. That dreams weren’t just something you did when you slept — dreams were the foundation, the roads, to where you wanted to go. But again, my circumstances weren’t ones of hardship or severe adversity. I wasn’t born into a rabbit hole that I had to scratch my way out of. Not like the man who taught me that it is never acceptable to think, “that’s it, I’m done, I can’t”.

Jesse Owens was twenty-three years old when he, a simple black man from Alabama with none of the extravagant training or surroundings of Hitler’s Aryan athletes, beat the odds, beat adversity, and beat the crap out of all the naysayers when he won four gold medals in the Berlin games. Twenty-three. Can you imagine?

I wasn’t alive to see Jesse Owens run — and he died when I was very young, so sadly, I never met the man either. But to this day, I still idolize him for all he taught me. When I was very young, it was his push off the line and his speed that I desperately tried to emulate. Nowadays, though I still hold his athletic prowess in high regard, it’s his courage, his strength and his presence that serve to remind me “that it’s never it, I am never done, and I never can’t”.

Today’s post inspired by The Daily Prompt: Teen Age Idol — “Who did you idolize as a teenager?”